Spain: from the (foreseeable) deadlock to the coalition government 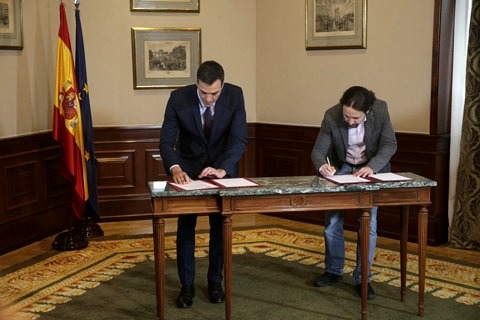 The complex negotiations with Unidas Podemos and nationalist parties

The negotiation that came with the appointment of Pedro Sánchez as president has had several peculiarities. First, the Europeanization of the independence process, which has been a central talking point of the investiture session to the extent that the socialist candidate needed the pro-independence deputies of the Republican Left of Catalonia (ERC) to abstain on the second investiture vote. After a few weeks of uncertainty as a result of the announcement of the Spanish Supreme Court’s jurisprudence, Oriol Junqueras, former deputy president of the Catalan Government, will not be able to take his seat at the European Parliament. Meanwhile, Catalonia’s former president Carles Puigdemont and Toni Comín, former Counselor of Health of Catalonia, took their seats as members of the European Parliament and attended on January 13 the plenary session in Strasbourg. Second, the negotiations for the investiture of Pedro Sánchez, which have been marked by the allocation of ministries between the Spanish Socialist Workers’ Party (PSOE) and the far-left Unidas Podemos. Although in the previous months, Pedro Sánchez had declared that a government agreement with Unidas Podemos could not be possible, the situation today is totally different.

A socialist candidate invested as President

During the plenary session, Sánchez defended his commitment is to seek “formulas for government majorities against blockage” with the different parliamentary groups. In this respect, the socialist candidate has deemed “inadmissible” that the stalemate of the last months has stunt a stable government for a year and a half. The parties of the center-right bloc were deeply against the speech of Pedro Sánchez and accused him of “agreeing with pro-terrorist and with independentists”, which will break the unity of Spain. ERC conditioned their abstention to a bilateral negotiation table with the Catalan Government whose details have not been explained, although the PSOE insists that the negotiations will be within the constitutional framework.

The first Coalition government since the return to democracy

The remarkable novelty is that, for the first time in the history of Spanish democracy, a coalition government has been formed. Although coalition governments are an extended practice in most European countries, Spain had remained an exception to date. For more than thirty years, the Popular and Socialist Party administrations have alternated in government. The coalition agreement reflects the fragmented landscape that emerged in 2015, which has provoked the inability to form a single-party government.

As a result of the negotiations, Unidas Podemos occupies the deputy Presidency of Social Affairs and four ministries (Labor, Equality, Consumer Rights and Universities). According to Pedro Sánchez, the Government will address major transformations in relation to territorial understanding, social justice, the digital transformation of the economy, the ecological transition and full equality for women.

Although it is a coalition government, the approval of parliamentary initiatives will not be easy since they will need the constant support of the Basque and Catalan nationalist groups.

Manuela Sánchez Gómez is a Doctoral Candidate International Law and alumni of Institute for European Studies (ULB), as well as a Public Policy Consultant.